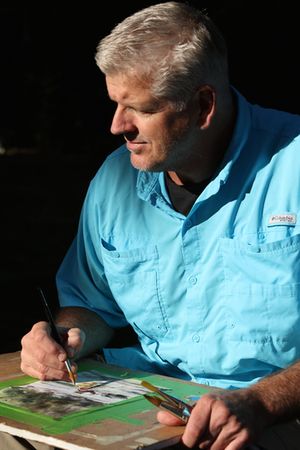 Dean Crouser was born and raised in Oregon and his love of fishing, camping and the outdoors can be found in the expressions of his art. His childhood summers were spent camping and fishing on the foothills of Mt. Hood, Columbia River Gorge and Central Oregon High Lakes.

When it comes to painting, he tries to keep his work loose and simple. "I am always striving to say the most with the least and like to keep my work loose and spontaneous."

Dean's work is licensed by several companies worldwide and his watercolor paintings of hummingbirds, fish and wildlife are enjoyed by thousands of art enthusiasts and collectors around the world. " My goal is to capture the beauty and simplicity of a scene in a manner that people haven't seen a million times before." Dean's unique style and abundant use of color add excitement and action to all of his work.

An accomplished athlete, Crouser competed in the shot put and discus on the University of Oregon's famed track and field team. He was a three-time NCAA champion, seven-time All American and was inducted into the U of O Hall of Fame in 2003. After more than 30 years his school records still stand. He lives in Gresham, Oregon with his wife Molly and has two children, Sam and Haley.